Posted on September 11, 2016 by Morgan Reynolds

Today is the 15th anniversary of 9/11 and guess what: our incurious media continue to ignore a forensic investigation about what really happened on that murderous morning in favor of implicitly defending the government’s totally false conspiracy fable.  Therefore the insight offered by mainstream media into 9/11 every year at this time is close to nil.  Their unwillingness to “cross the line” leaves the media little to talk about on each anniversary, so they offer us sentimental stories about the surviving family members of the victims of the 9/11 savagery. 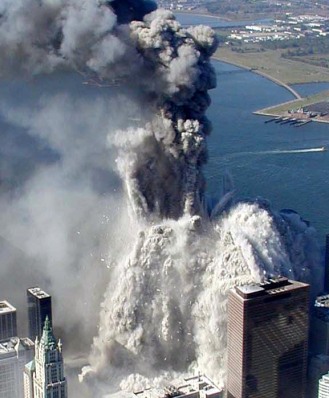 Well, even cowardly coverage can be modestly useful if combined with some thought.  Take this piece by NPR: “Sept. 11 Families Face ‘Strange, Empty Void’ Without Victims’ Remains.”  Sally Regenhard whose son Christian was a firefighter who disappeared at the twin towers on 9/11 is quoted as saying: “You feel that it’s not real.  Your mind can’t accept the fact that this person died because there’s no evidence of it.”  According to the NPR account, death certificates for 1,113 victims have been issued without any remains received by their loved ones.

OK, why not check out other remains discovered after 9/11?  How many toilets would you guess were recovered from the twin towers?  It should have been a couple thousand from 220 floors of nearly an acre each.  And the correct answer is … none!  Zero.  Nada.  How many computers were recovered from these massive office buildings?  Once again, none.  Zero.  Nada.  How many file cabinets?  Answer: one steel case file cabinet.  Where did all the desks, chairs, carpet, phones and other building contents go?  “A strange, empty void” is right.  Human remains were just a part of all that was missing.

Why was so little recovered?  Answer: because most of the twin towers and their contents were “turned into a volcano of dust”  (p. 3 WDTTG).  And it was fine dust, an incredible turn of events, as fine as DNA.  The buildings did not “fall” or “collapse,” they dissolved into dust, including most of the twin tower steel.   Hence, the rubble pile was hardly higher than the lobby level.  The amount of steel barely covered the ground.  In truth, there was no “pile” as Dr. Judy Wood points out (p. 176 WDTTG).  Ask yourself, where were the 110 stories that should have been stacked up from each tower if they had just  “collapsed.”  Did not happen.  Not in evidence.  The towers basically dissolved into enormous dust clouds.

Why can’t people trust the evidence of their senses?  Why can’t they think for themselves?  Why trust authority figures and their lies that openly contradict facts right in front of our faces?  Lots of possibilities here but government schools pop into mind first.  Looks like we need to think like a child to see that the emperor has no clothes.  Still, it boggles my mind that so many adults accept political lies from politicians and media.  Superb perception management defeats common sense again I guess.  To paraphrase Henry Kissinger, “It is not a matter of what is true but what is perceived as true that matters.”

You want more on this issue?  Read some of my other articles about 9/11 on this site.  But most of all read Dr. Judy Wood’s exhaustive treatise, Where Did the Towers Go?

38 Responses to The Strange, Empty Void of 9/11 Victim Remains