Posted on December 6, 2016 by Morgan Reynolds

This year marks the 75th anniversary of the December 7, 1941, Japanese “surprise” attack on Pearl Harbor, killing 2,403 Americans and wounding 1,178. Central Arkansas is staging a week-long series of events to commemorate “a date that will live in infamy” that propelled U.S. entry into World War II, allegedly our last “good” war. And that war thrust Franklin D. Roosevelt to “greatness.” Exhibits and tours are supposed to provide learning experiences for young people. 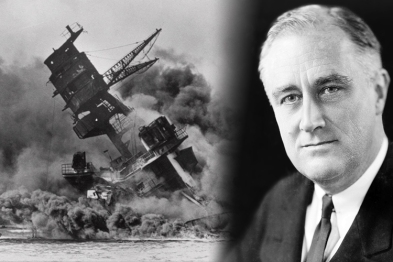 But will such events teach children or us (older children) the truth about the 75-minute attack on Pearl Harbor? Nope, improbable in the extreme. The facts are too disturbing, even at this late date. Their exposure would wreck the folklore about an unprovoked attack by “the empire of Japan” on a peace-loving, innocent USA. Yet indisputable facts from the U.S. government itself prove beyond reasonable doubt that President Franklin Delano Roosevelt and top advisors like George C. Marshall and Naval bosses like Frank Knox and Harold R. Stark arranged the successful Japanese attack at Pearl.

That’s right, FDR and his advisors arranged it and knew exactly when it would happen. The President and his co-conspirators kept vital intelligence from Naval Commander Husband E. Kimmel and Army Commander Walter Short at Pearl so that loss of life and ships would be huge, no mere pin-prick like Fort Sumter or even the Churchill-arranged German sinking of the British war ship Lusitania in 1915 which cost 128 American lives. Bigger loss of life equals bigger casus belli.

How do I know FDR did it? While there are many books proving Roosevelt’s perfidy, 17 years of dogged research by Robert B. Stinnett gave us his magnificent Day of Deceit: The Truth about FDR and Pearl Harbor (2001) plus we have John V. Denson’s masterful 73-page essay, “Franklin Delano Roosevelt and the First Shot: A Study in Deceit and Deception” in his edited volume, Reassessing the Presidency (2001).Consider some key facts about how the set up worked:

On Sunday night December 4, 2016, I watched the History Channel’s presentation of “Pearl Harbor: The Truth.” History is owned by A&E networks, a joint venture between Hearst Corporation and the Disney-ABC television group of the Walt Disney Company. So what could we expect, it’s corporate media, right? Slickly packaged lies.

True but I also knew in advance that the show was to go awry because it was based on a new book by Anthony Summers and Robbyn Swan, A Matter of Honor: Pearl Harbor: Betrayal, Blame and a Family’s Quest for Justice. I have not read the book but from the back cover we learn: “…through sheer inefficiency—the top brass in Washington had failed to provide Kimmel with vital intelligence…They [authors]…clear President Franklin D. Roosevelt of the charge that he knew the attack was coming.” 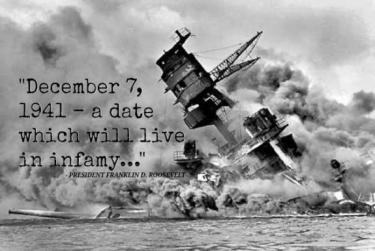 While it has some worthwhile things to learn, the show whitewashes the Pearl Harbor set-up as “blunders” and claims FDR was in the dark about the whole deal. Historian Craig Symonds says toward the start, “Washington knew everything.” Agreed. And Roosevelt did not know anything!? You cannot be serious (scholar/researchers!). Talk about naiveté in service of the regime. Washington does not work that way.

The History show mentions none of the facts I list above. None, zero, nada. Ignoring such critical facts makes it a lot easier to keep the Roosevelt legend about Pearl Harbor alive, now doesn’t it?

The History show notes the connection between 9/11 and Pearl Harbor because both were attacks on American soil with similar losses life. My agreement with that idea goes much further: similarities include the “unthinkable” idea that “Bushians” arranged 9/11 as the Rooseveltians did Pearl Harbor.

History also points out that all presidents since Roosevelt refuse to endorse the Congressional attempt to repeal the scapegoating of Kimmel and Short. Why? Maybe because any such move would lead to official confirmation of Roosevelt’s treason and far more.

Roosevelt, ironically chief planner of the attack, appointed his “Roberts Commission” chaired by Associate Supreme Court Justice Owen J. Roberts to investigate the facts (sure) about the Pearl Harbor attack, the first of 10 investigations. Only seven weeks later (!) the Commission reported its findings to Congress, accusing Admiral Kimmel and General Short of “errors of judgment” and “dereliction of duty.” It only takes seven weeks to conclude an “investigation” in a town where the result is predetermined. Admiral James O. Richardson, the previous Pacific fleet commander whom FDR fired, commented,
“It is the most unfair, unjust and deceptively dishonest document ever printed by the Government Printing Office.  I cannot conceive of honorable men serving on the commission without greatest regret and deepest feeling of shame.”

Admiral William Harrison Standley, a member of the five-man Commission, later disavowed the report, calling Roberts’ handling of the investigation “as crooked as a snake,” and maintaining that “these two officers were martyred” and “if they had been brought to trial, both would have been cleared of the charge.” General Short had petitioned a court martial but was denied. In 1944 courtesy of a Congressional mandate, court martials for Kimmel and Short began. The Army Pearl Harbor Board concluded its report about Walter Short’s trial with: “Up to the morning of December 7, 1941, everything that the Japanese were planning to do was known to the United States except [Tokyo’s final diplomatic message] the very hour and minute when bombs were falling on Pearl Harbor.” Criticism of the President was forbidden as beyond its jurisdiction. Both Pearl commanders were found innocent but the reports were suppressed and more cover-up “investigations” conducted to overturn the results!

Following a 52-47 Senate vote in 1999 exonerating Kimmel and Short, Senator William V. Roth Jr. (R-DE) said, “They were denied vital intelligence that was available in Washington,” adding that they had been made scapegoats by the Pentagon. Senator Strom Thurmond (R-SC) termed Kimmel and Short “the two final victims of Pearl Harbor.”

More important than the injustice to Kimmel and Short is traitors from Roosevelt on down getting away with their crimes. Remember Pearl Harbor—by all means—but for what it really was. There is a long, lamentable history of fraudulent pretexts for war by evil politicians around the world. The United States is no exception.