February 28 I posted an article scoffing at Elon Musk’s announced plan to send two high-paying passengers on a trip beyond the moon and back, the deadly radiation problem being the main obstacle, compounded by a series of technical problems yet unsolved.

One of the truly good guys on the issue of manned (politically incorrect term!) space travel–Jarrah White from Australia–has proposed a solution to the dilemma of protecting travelers from radiation during the proposed Space X trip.  First, use the “cones of escape” over either North or South Pole to avoid Van Allen belt radiation, and second, launch during a full moon to shield humans from solar flares for up to seven days.

The cones of escape make sense but involve either launching directly from the Arctic or else low earth orbit until positioned to accelerate out the polar “cone” toward the moon.  This would raise the degree of technical difficulty and expense enormously for a moon trip but at least it makes sense in avoiding the “fried space traveler” problem in traversing the Van Allen belt.

And the full moon ploy?  That is supposed to shield absorption of solar flare radiation during a 7-day window of opportunity offered by the full moon.  I’m no expert on the radiation science involved so view Jarrah’s video for more.

1. Is the Van Allen “cone of escape” stable and wide enough to safely traverse entire distance of VA belts?

2. That full moon “magneto tail” does not protect against pervasive cosmic rays and micro meteorites, does it?  Would such 5-day exposure be potentially fatal?

Thanks in advance for any help.  I want to do a short article plugging your new video and include clarification on my two questions.

The first part of your question, if you’ve ever seen diagrams of the Van Allen belt, you’ll see that it forms two donut shaped rings surrounding the Earth. These donuts represents the regions in which solar protons and electrons have been trapped between the magnetic field lines. The volume unoccupied by radiation over the poles form the shape of cones emanating from the North and South poles, hence the name “Cones of Escape”. 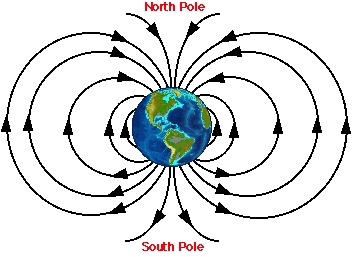 Notice how the field lines spread out along the north and south magnetic poles. Obviously, there are going to be fluctuations in the magnetosphere geometry due to solar particles impacting with it, but the rule of thumb will be that there is no trapped radiation along the axis of the magnetic poles. The radiation can only be trapped where the magnetic field lines coil around the Earth as shown in the diagrams above. The idea is to launch with an outbound trajectory inclined to the geographic equatory >60°. Beyond such latitudes, the radiation fluxes become negligible and so such a trajectory would take the spacecraft through this radiation free region and over the outer edges of the belt. 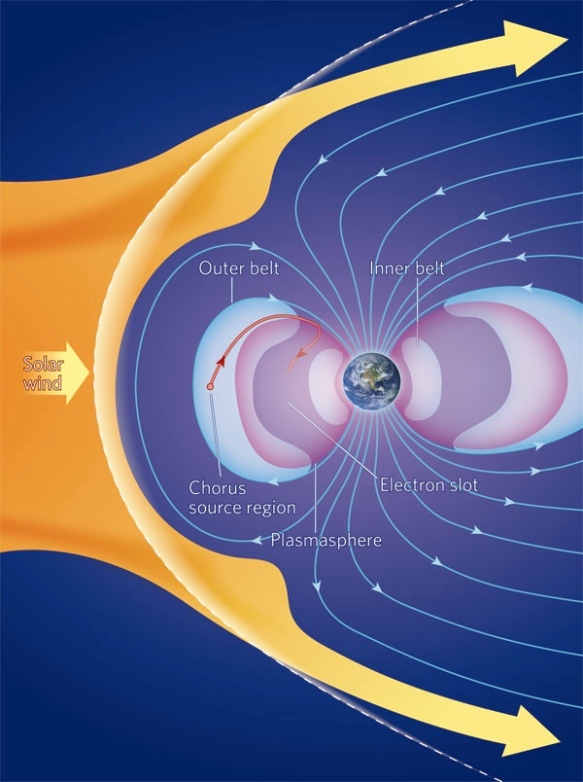 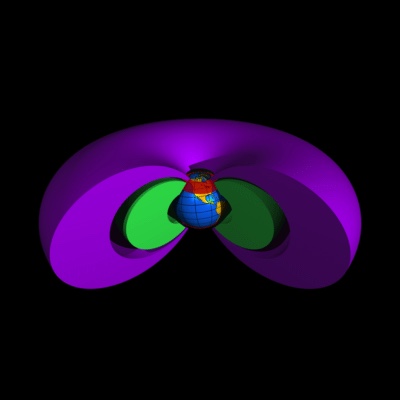 And the second question, the Earth’s magnetic mostly shelters against solar flare radiation. The radiation from solar flares are mostly protons and some heavier ions with energies up to several hundreds of MeV (million electron volts). Cosmic rays are protons and ions that have been ejected into space by distant stars and even supernovae. Because they have been accelerated across that vast distance of the universe, they have energies all the way up into the GeV (billion electron volt) range. Most of the highest energy cosmic rays have enough energy to penetrate the magnetic field and are primarily attenuated by the Earth’s atmosphere.

However, cosmic ray particles are extremely rare compared to solar flare particles and are more of a concern for long duration missions. Such as a flight to Mars or an extended mission on the surface of the Moon lasting months to years. You see, it’s not just the particle energy that determines the radiation damage, you also need to know the flux or number of particles passing through a unit of area per unit of time.

In the case of a solar flare, you are getting thousands to even millions of say 10MeV protons passing through every square centimeter per second. But cosmic rays are so few and far between that you’d have to measure the fluxes in square meters per second in order to find a least one 200GeV cosmic ray for example. Getting struck by a single 200GeV proton or even a 2GeV proton probably won’t be any concern, but getting struck by a substantial amount of them would certainly lead to illness and death. That’s why particle physicists put thick walls of concrete between themselves and the particle accelerators, like the Large Hadron Collidor – they’ve got a substantial amount of protons whizzing round with energies up into the GeV or even TeV (trillion electron volt) range. You don’t want to be the way of a high flux beam of GeV protons if anything goes wrong!

Of course, the fluxes of GeV cosmic rays are minuscule compared to the GeV fluxes used in the Large Hadron Collidor, or even MeV proton fluxes of solar flares. Due to the rarity of GeV cosmic rays, you’d need to expose yourself to them for several months before you’d suffer health problems. In Earth orbit and even at the Moon, the radiation from cosmic-rays alone is about 10rad/year. Our atmosphere reduces it to 0.02rad/year.

Basically: the risk to short term missions (1-2 weeks) are the Van Allen belts and solar flares which deliver enormous doses of radiation within very short exposures; on long term missions, you are exposed to much smaller doses of cosmic radiation over several months which inevitably all adds up over time, plus the large doses from solar flares that occur during that time.

This entry was posted in Other Conspiracies. Bookmark the permalink.